On Thursday, 15 December 2016 class 1S held a bake sale to raise funds for Loreto Rumbeck.  Thirteen bakers made an assortment of cookies, cupcakes and brownies. Thanks to all the students who organised, cleaned up and looked after the money and thanks to the many students who made a donation.  The sale was a big success and an impressive €160 was raised! 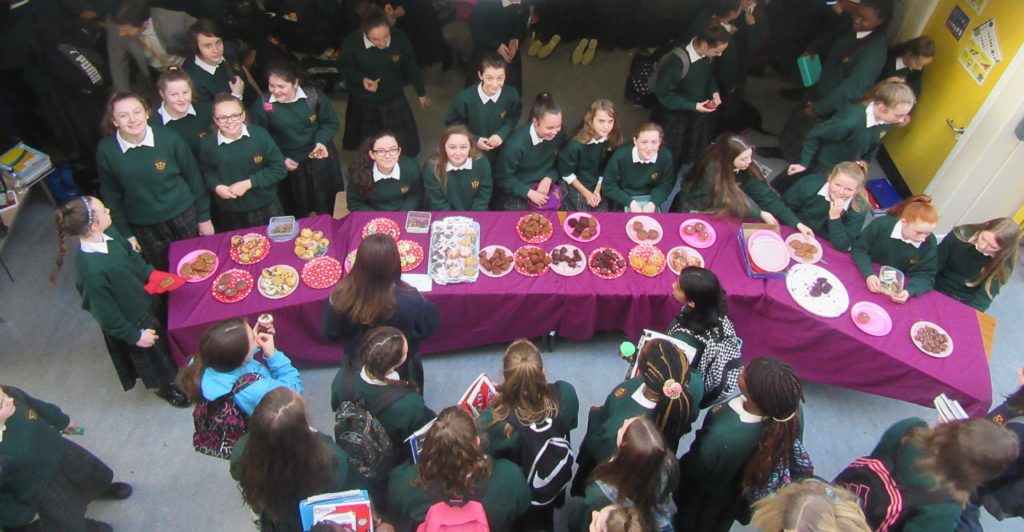 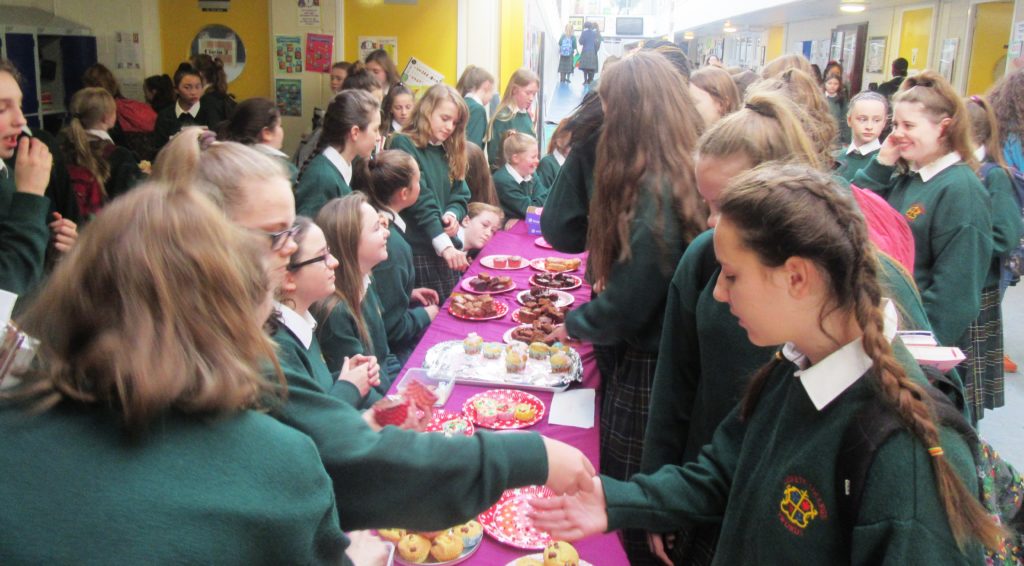 We also had our Annual Christmas Jumper Day on Friday, 16 December and students were asked to contribute €1 for Charity – thanks to everyone who made the day such a success. 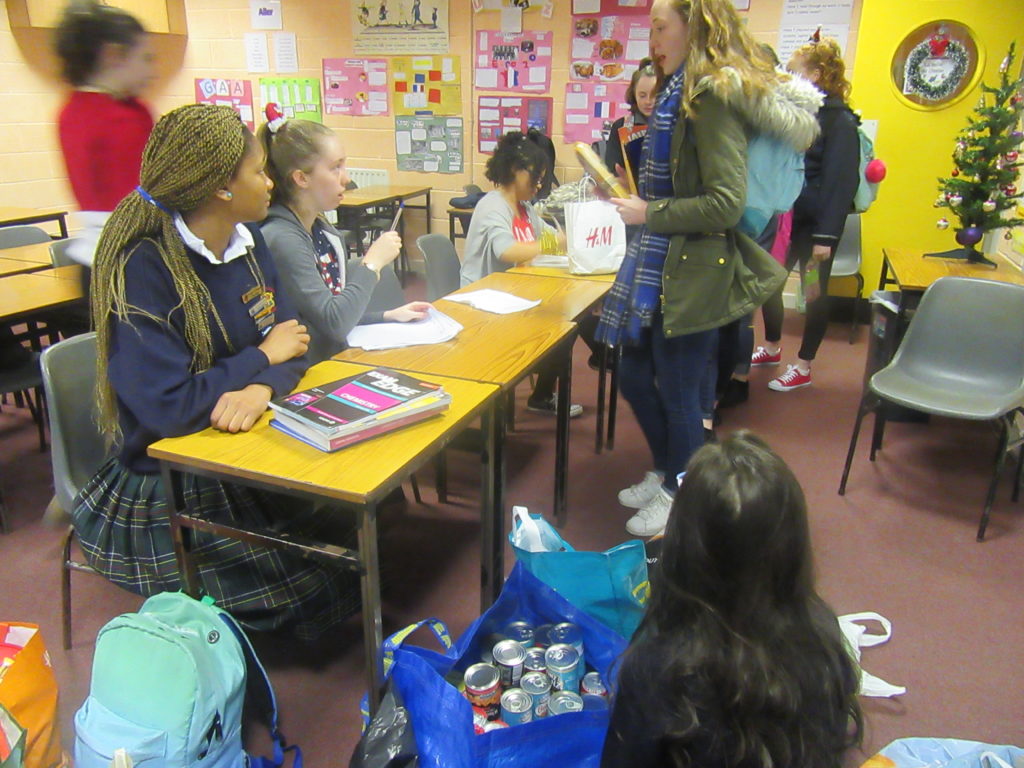 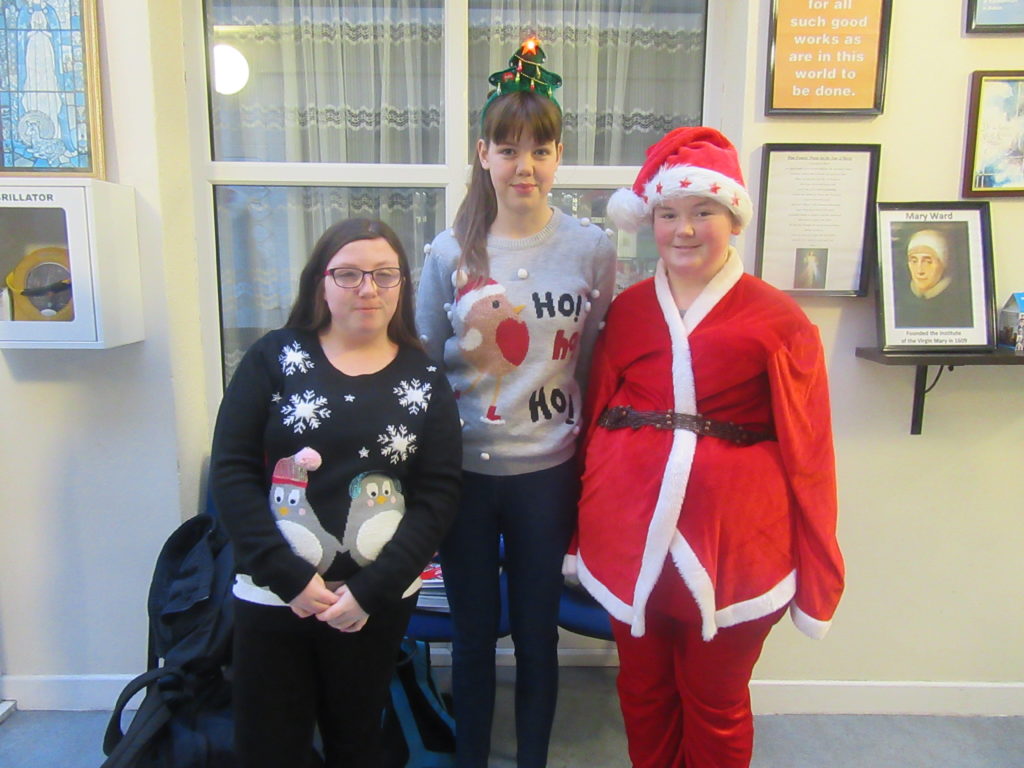 Class 4T organised sandwiches for the homeless with Ms Mary Gorman in December – below some of the students from 4T who helped out in making the sandwiches. 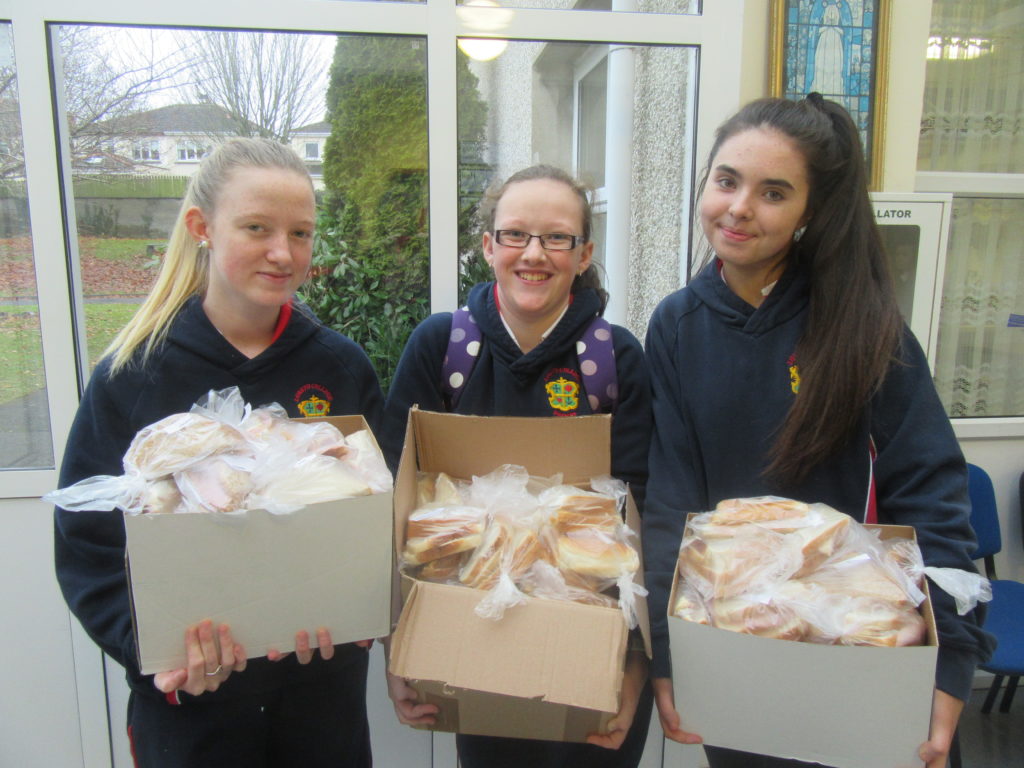 On Tuesday, 18 October 2016 we were delighted to welcome Sr. Brigid Tunney to the school who gave a talk to the students on the wider Loreto Community.

We recently held a non-uniform day and a cheque for €1,000 was presented to Sr. Brigid for Loreto Rumbeck. 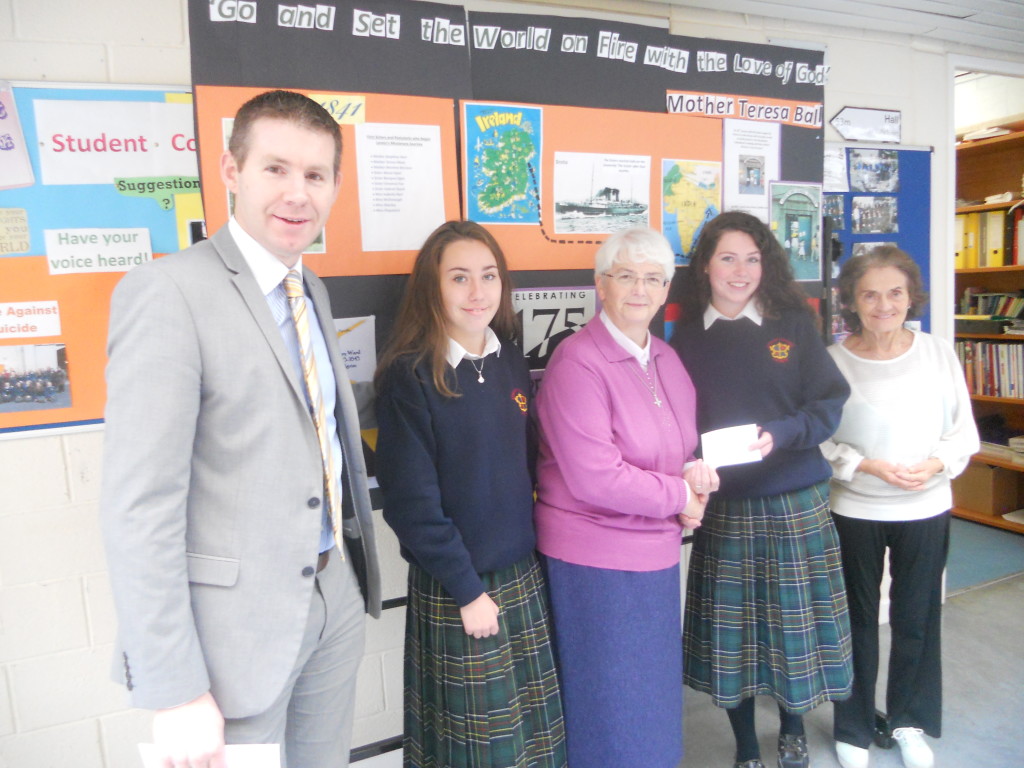 Christmas Jumper Day – our annual Christmas Jumper day took place on Friday, 18 December and it was a great occasion with the added bonus of students contributing €2 towards The Homeless – the school was delighted to raise €1,010 Euro!!    We thank all our students for making such an effort and participating in the event.  The students all looked very festive as you can see by clicking here

Annual Christmas Hamper collection for St. Vincent de Paul was organised this year by Ms Theresa Sheelan and a group of students – thanks to everyone who sent in donations for this worthy event – the response was fantastic!  Click here for photos 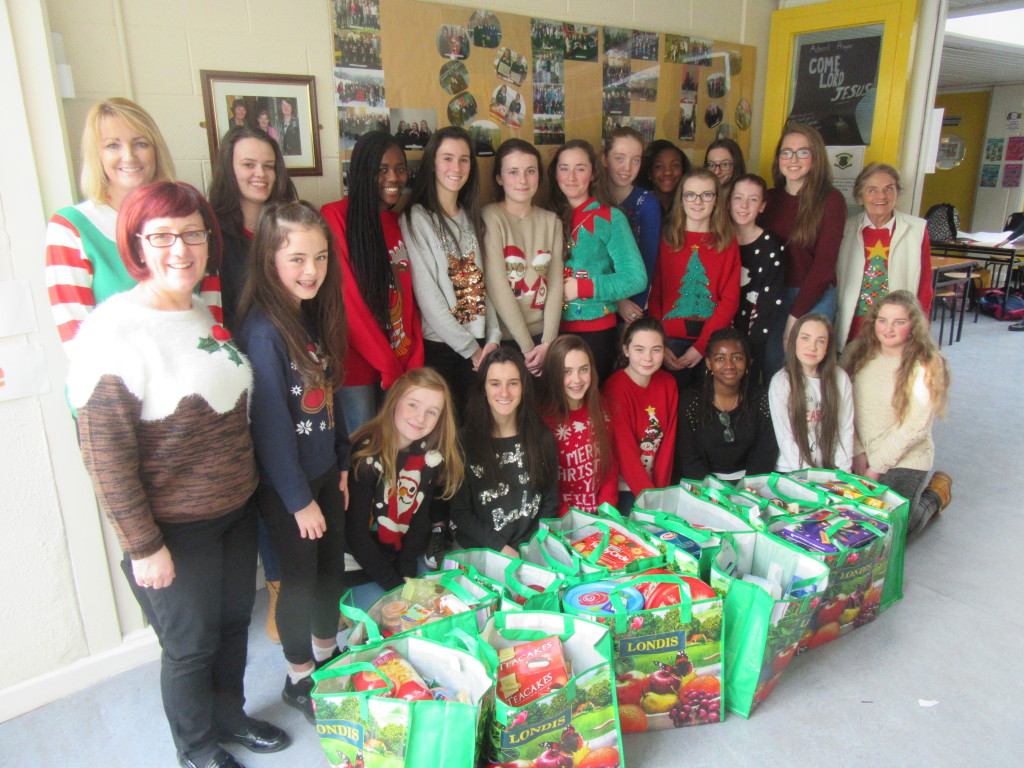 Students Held a Christmas Party for Members of the Local Senior Citizens Club  on Friday, 18 December 2015- students provided entertainment and tea/cakes and made it a very festive occasion – thanks to Ms Theresa Sheelan for organising the event.

2S held a Bake Sale on Thursday, 26 November 2015 – they are fundraising as part of their CSPE project – “Adopt a Panda” 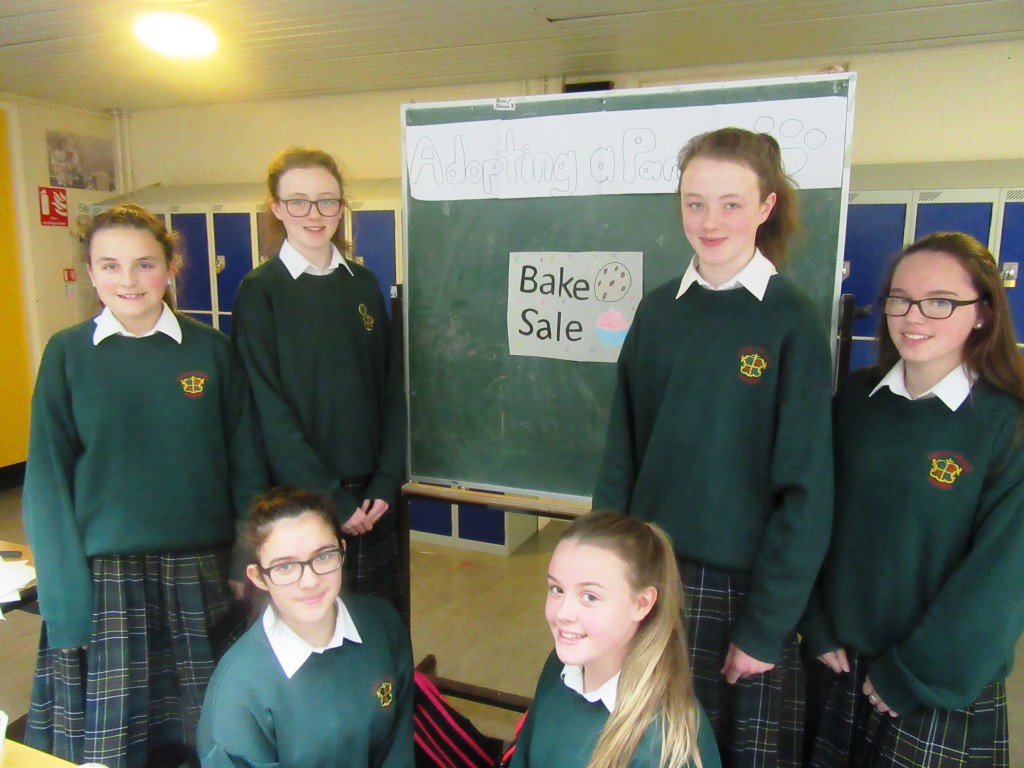 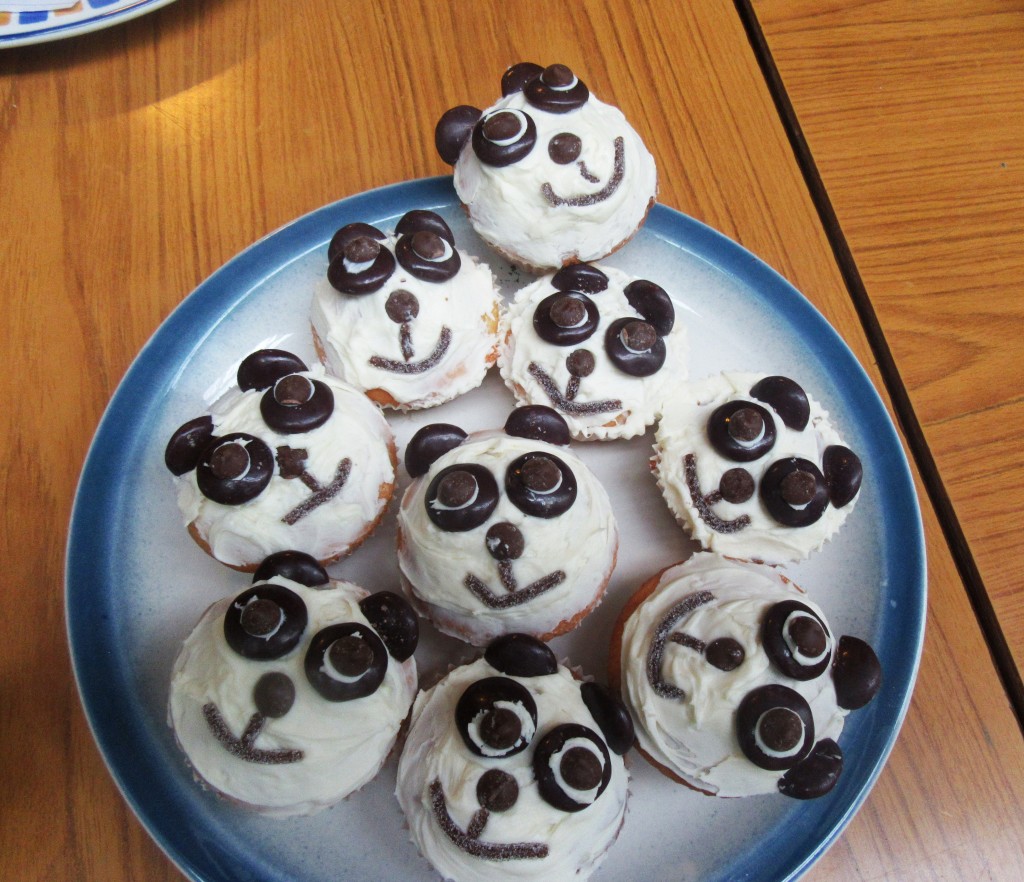 Loreto Swords has a history of supporting this very worthwhile cause and we were delighted with the response we got this year!

Below is two of our past pupils who still contribute to the Shoe Box Appeal year on year! 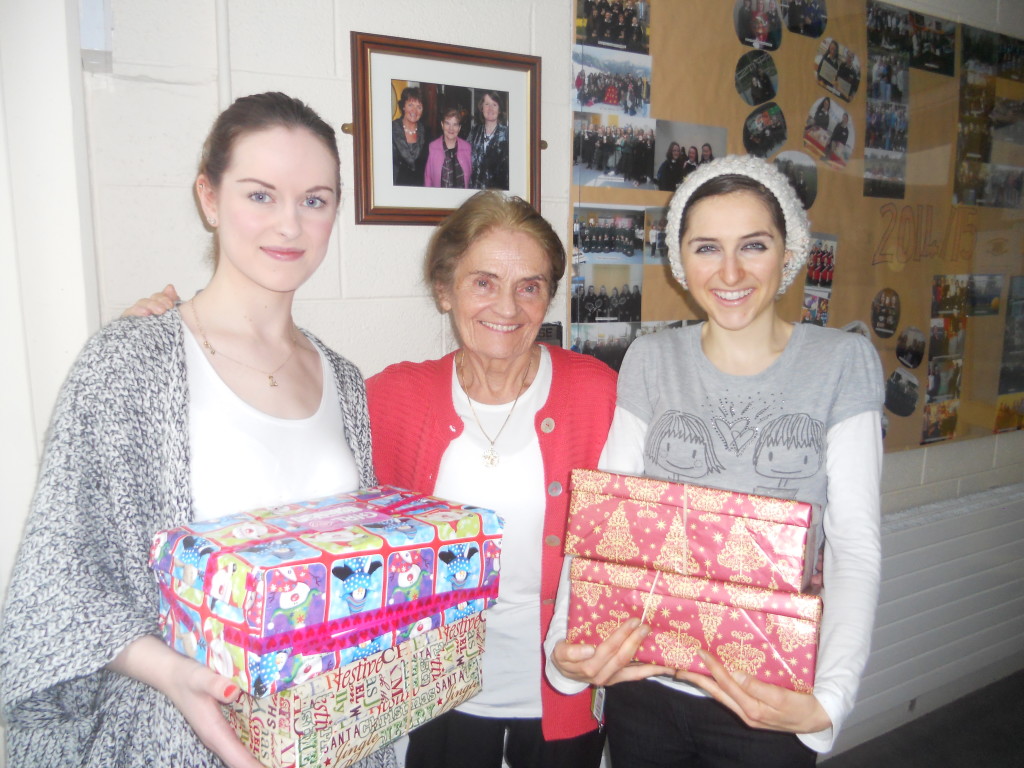 Trocaire – various fundraising events took place in the First Term of the Academic Year 2015/16 in aid of the recent Refugee Crisis – we were delighted to be able to present a cheque for €1,000 to Trocaire on Friday, 23 October 2015 – thanks to all our students and to Ms Theresa Sheelan for organising the fundraising over the course of the term.   The students had a talk from Trocaire following the presentation of the cheque. 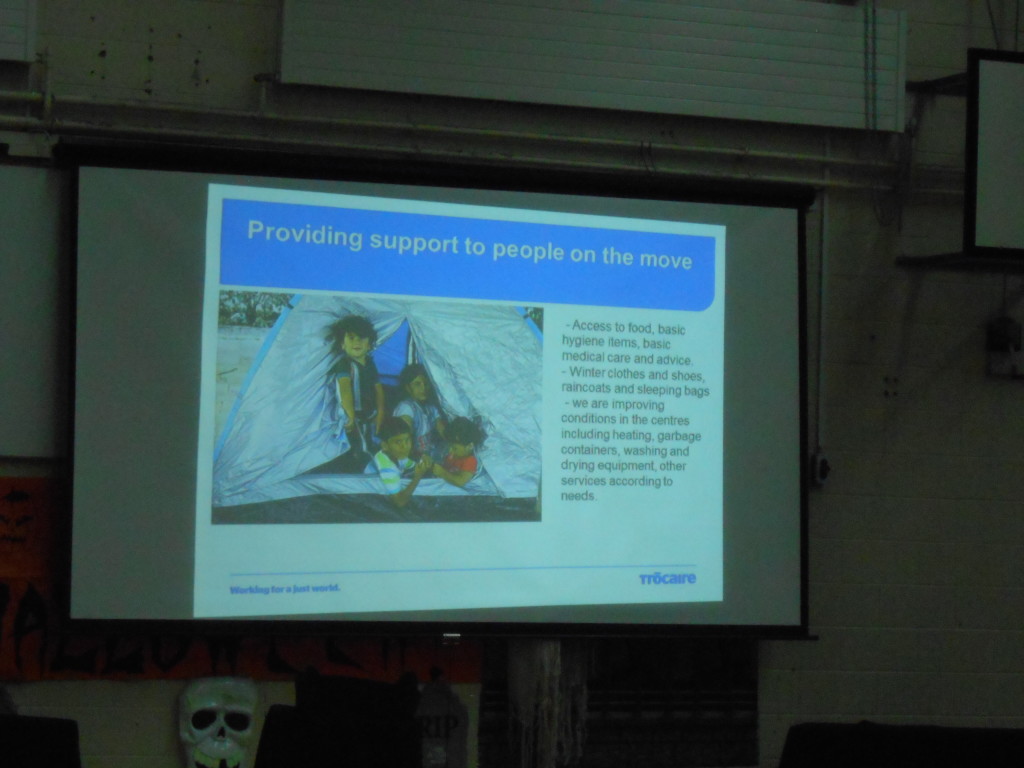 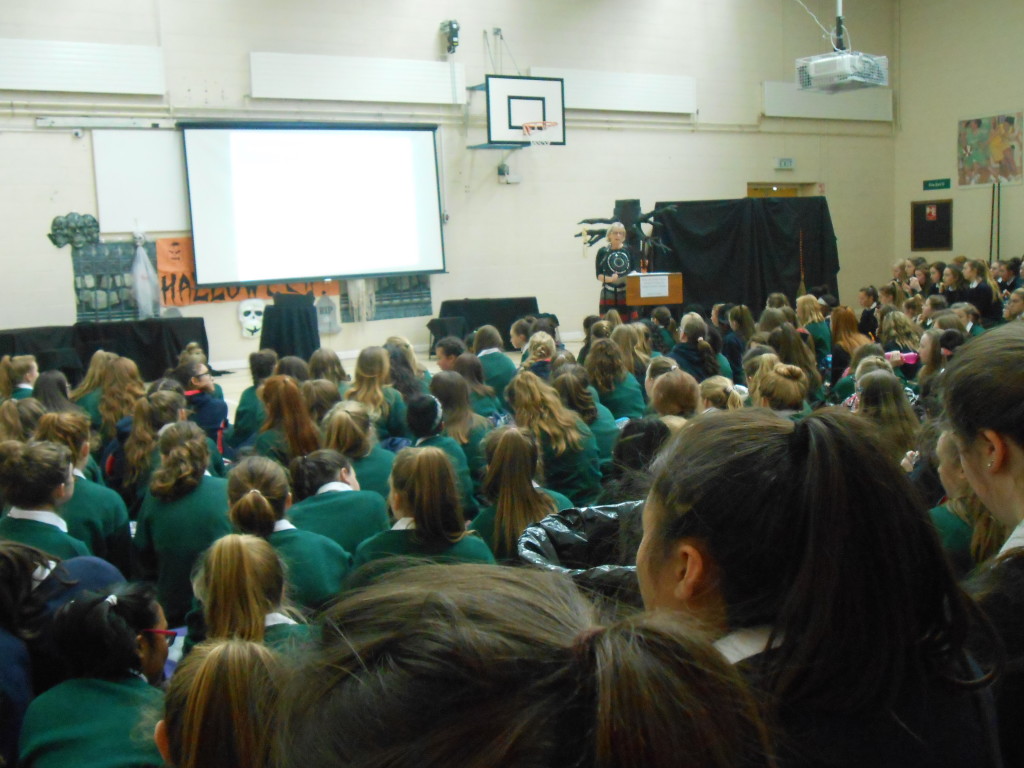 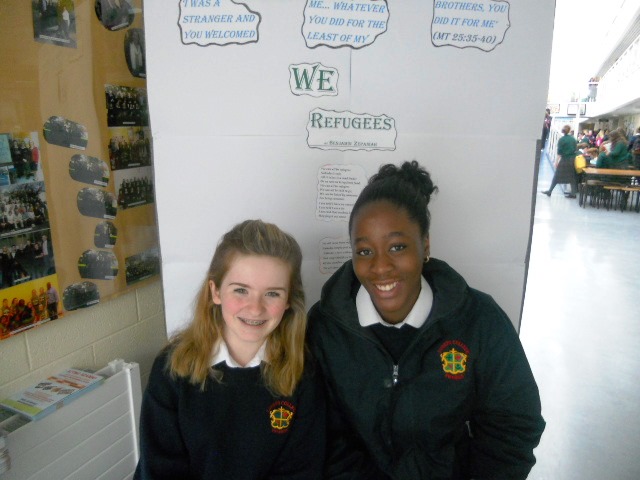 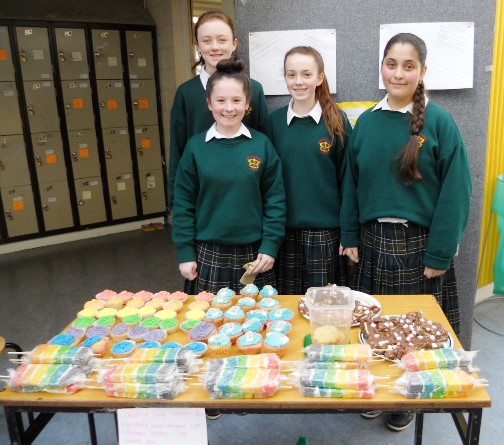 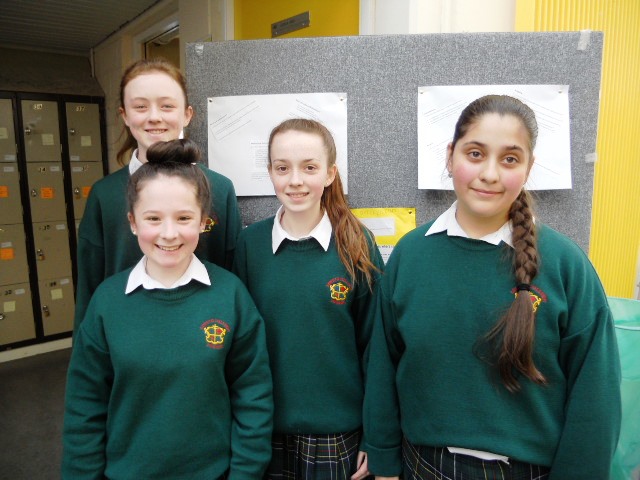 A Unicef Fundraiser was organised in April 2015 as part of the CSPE studies – well done to the students for all their hard work. 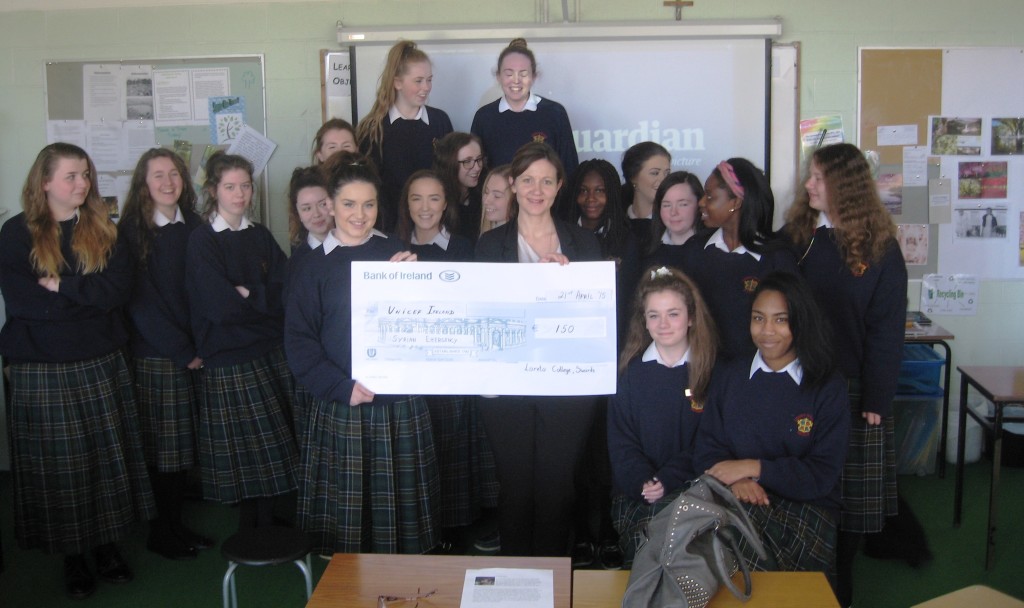 Christmas Jumper Day proved to be a fun activity for the girls as they got into the Christmas spirit and was also an opportunity to fundraise for Charity – this year St. Vincent de Paul was the nominated charity. 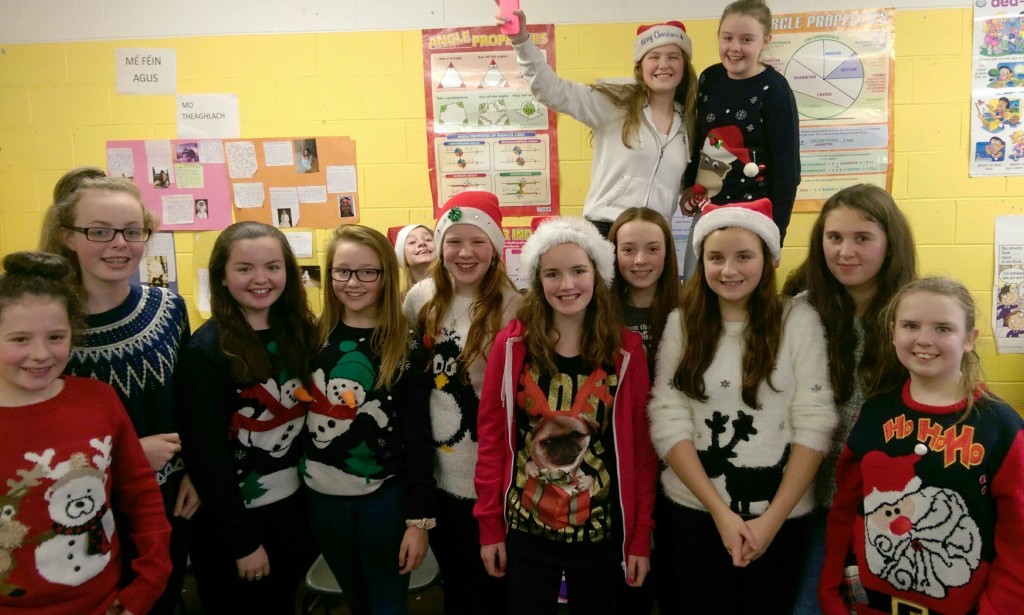 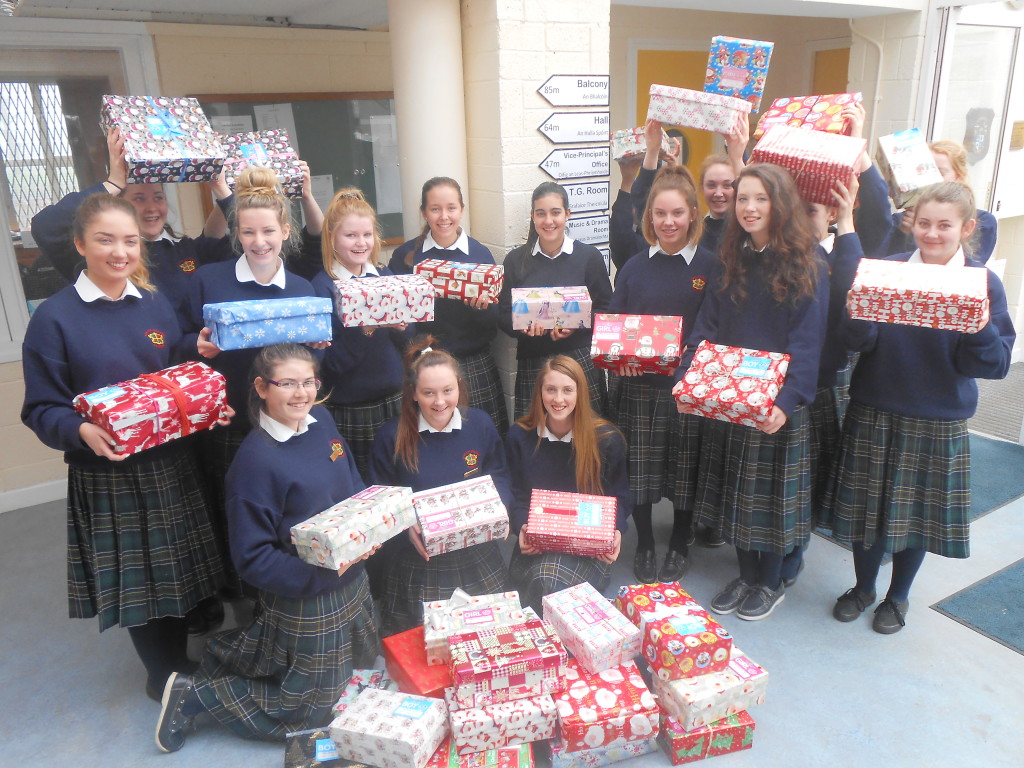 Copper Collection – March 14th 2014 A copper collection took place and all class groups helped to fill containers with spare coppers – each class had its own container and there will be a prize for the class in both Junior and Senior cycle who collected the most – watch this space for the winner!  All proceeds for Charity.  Click for photos 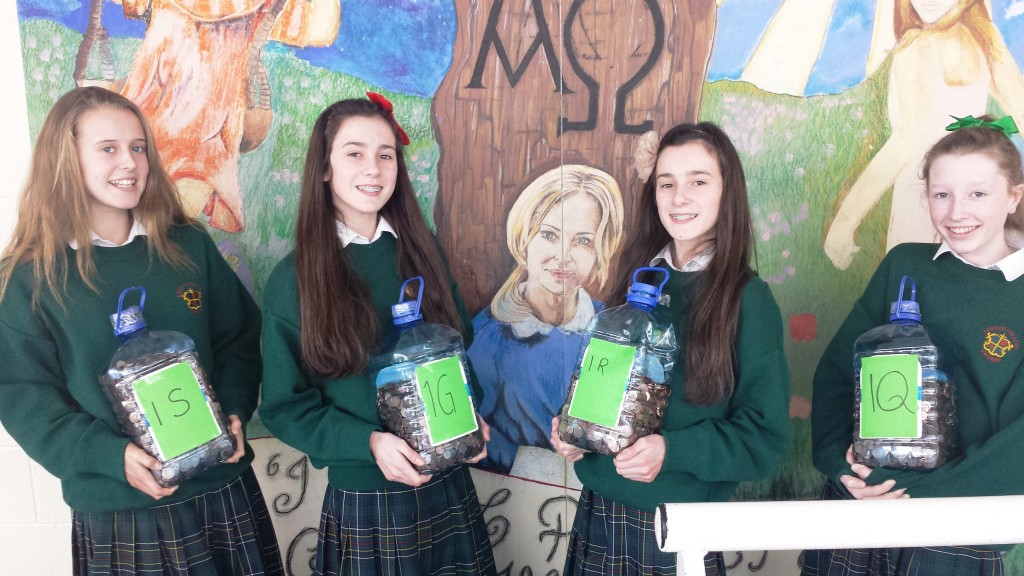 Loreto Rumbek is the first secondary school for girls in Lake State, a province of 40,000 square kilometers with a population of 350,000 in South Sudan, the Loreto order is proud to be a part of this wonderful step in education for females in Sudan.   ‘Traditionally, in the Dinka tribe, a woman is valued by her cow value. She is rated by how many cows they can marry her for.’ Women are very much second-class citizens.  Sr. Margaret O’Shea gave a talk to all our students on Thursday, 31 January and gave an insight into the lives of those girls living in Sudan.  Loreto Swords has been fundraising for Rumbeck and a cheque for €4,000 was presented to Sr. Margaret who will be travelling back to Sudan in the coming weeks – thanks to all our students for their hard work in raising this fantastic sum of money!

Click this link for a taste of Sudan  http://www.youtube.com/watch?v=htILjgOlEtI&feature=player_embedded

18 – 20 Nov 2013  –  The recent Typhoon which hit the Philippines is estimated to have killed over 4,000 people and left a further 4 million displaced from their homes.  Here in Loreto an impromptu collection was made to raise some funds for this devastated region – thanks to those who supported the collection and to the students who organised same. In addition to the collection a coffee morning was held by the Staff – over €1,300 was collected during the week and it was down to the generous spirit of the whole school community which made it possible. 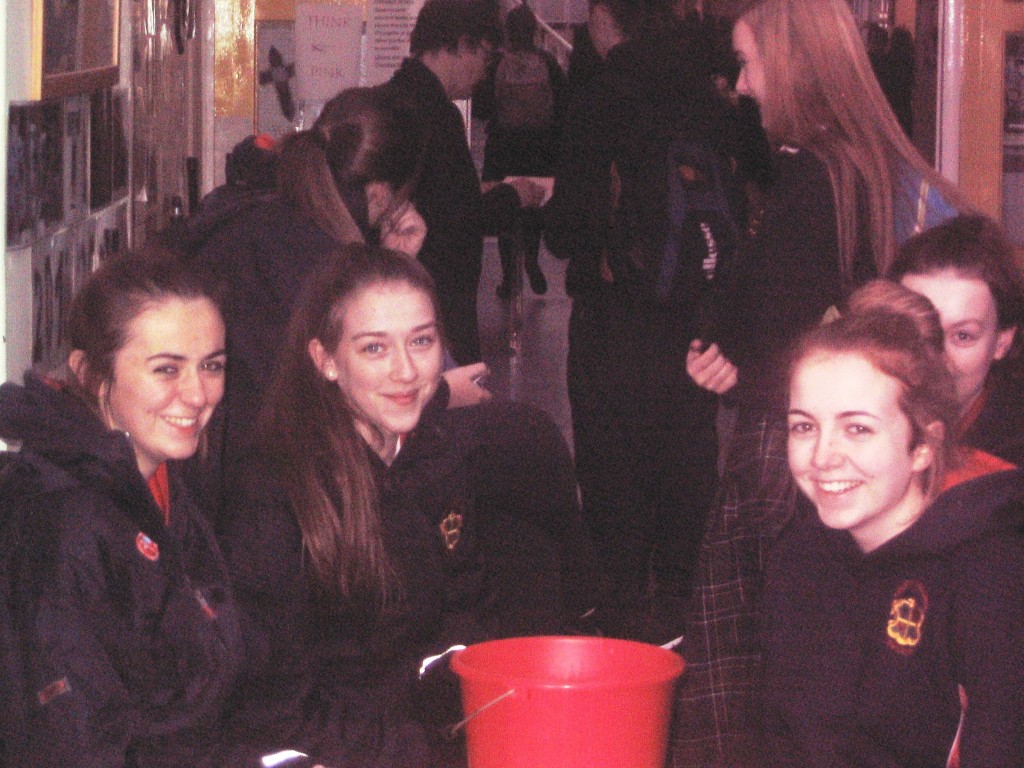 A Cheque was presented on behalf of the school by Mr Michael Behan to members of the Filipino Community for the Philippine Red Cross. 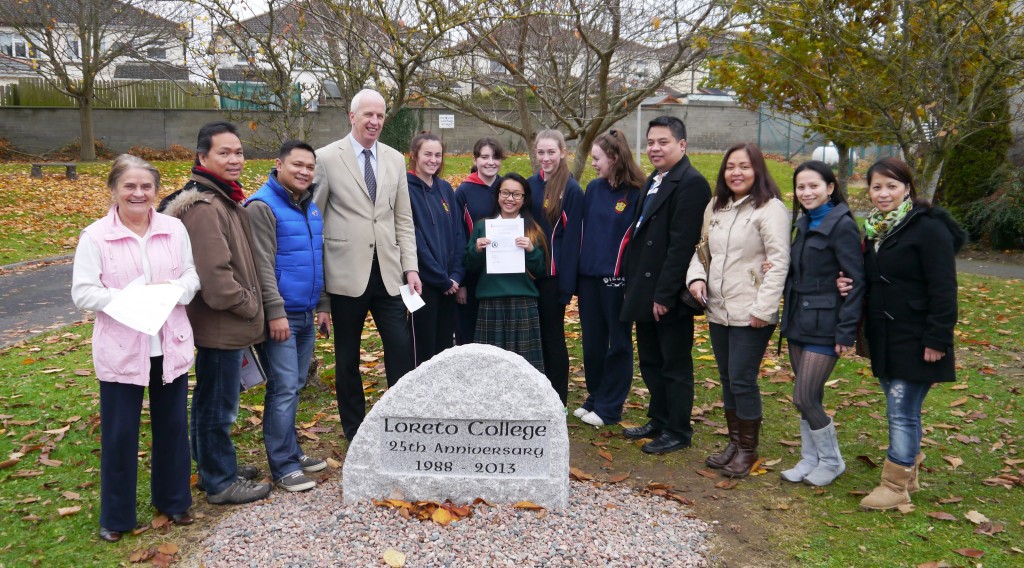 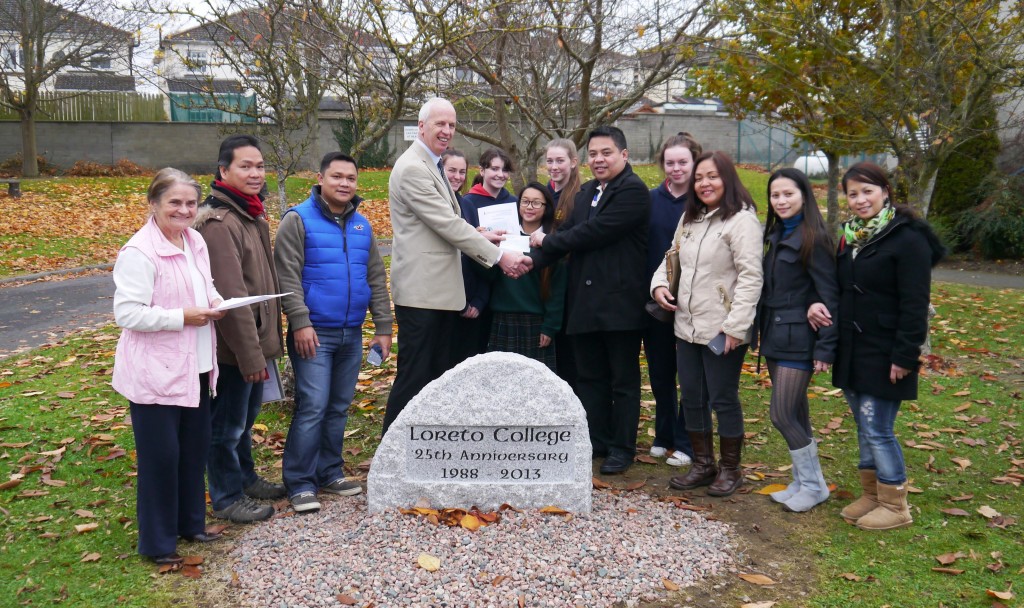 The Shoe Box Appeal took place this year and we are delighted to report it was very well supported and over 300 Shoeboxes were filled!!  The boxes were collected by Ms Charlene Piggott on Friday, 15 November.  The Transition Year Class went to the Depot on Monday, 17 November to help in the loading of the shoes boxes.  Sincere thanks to all the students who took part and a special thank you to Ms Elizabeth Cronin who organised the appeal and who provided so many empty shoe boxes for the appeal.  Click here for photos 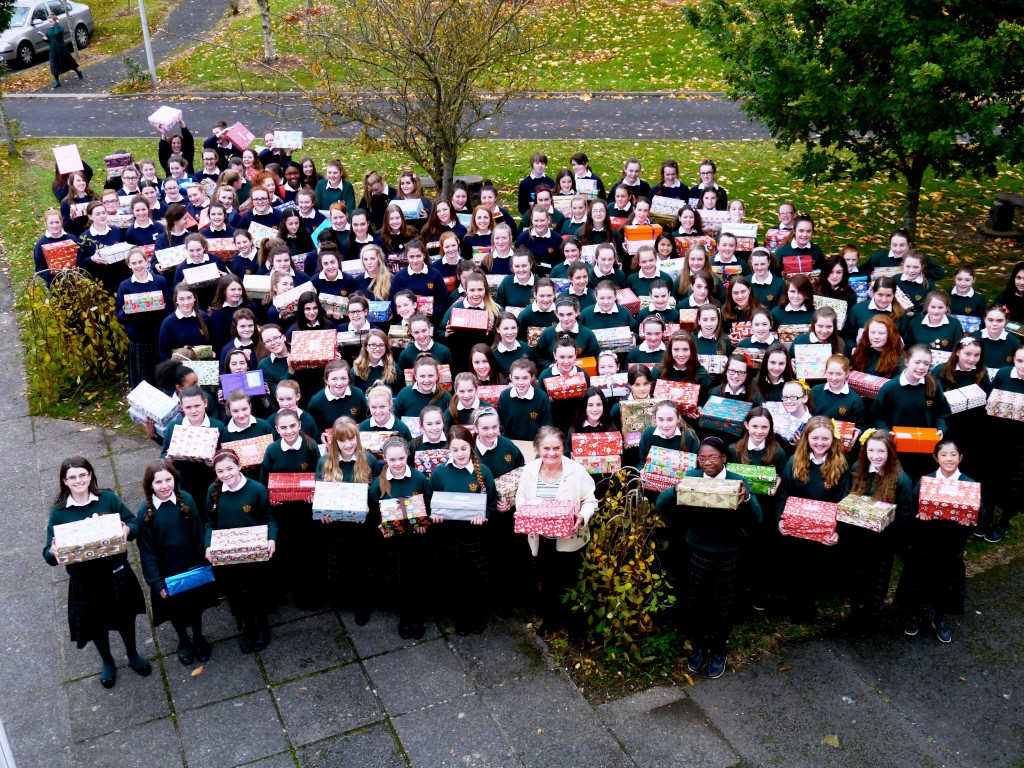 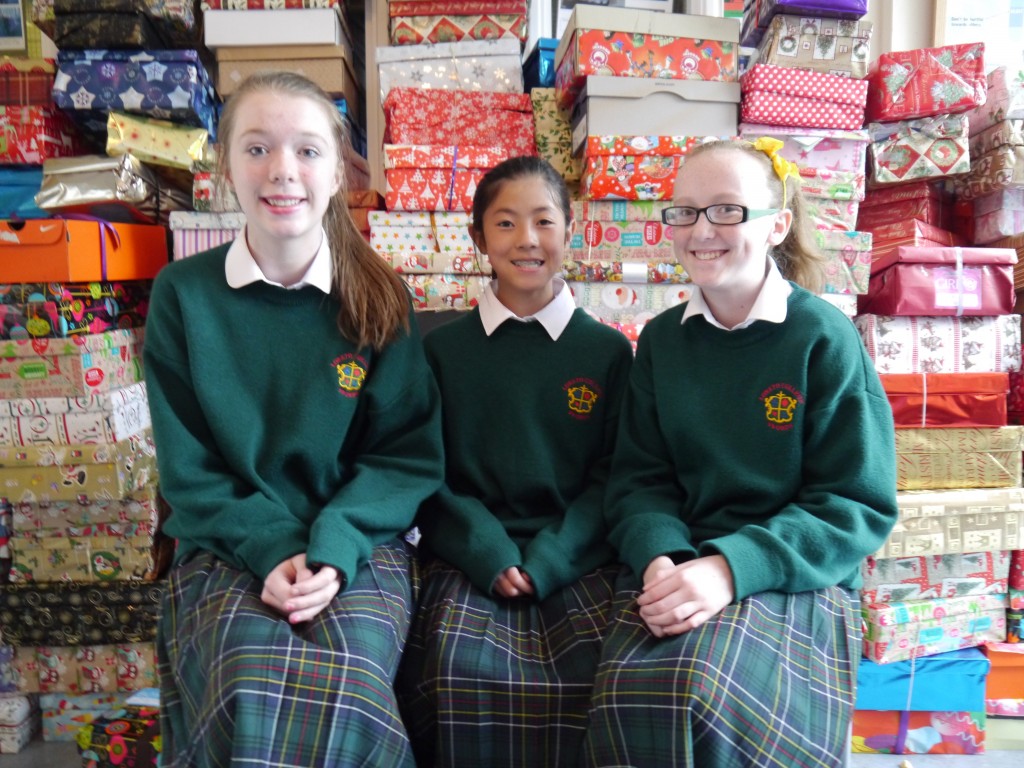 Loreto College, Swords takes part in various Fundraising activities during the year.  For the Academic Year 2013/14 Loreto College, Swords has chosen Loreto Rumbeck in Sudan as one of the organisations we will be supporting.  Sr. Margaret O’Shea who was on the teaching staff last year has gone to Rumbeck this year.  A non-uniform day was held and the amount raised was in excess of €1,110 – many thanks to all the students who contributed €2 and to the students and staff who collected the money.  Click here for more photos of the organising group.  Check back for further updates during the year.